Thank you for your interest in the Panini Fest event. The goal of the event is to have an annual gathering for people within the Colorado rhythm game community and to introduce more players from outside the state to the fantastic player base that we have. Tournament participation is not required to attend the event. However, it is encouraged regardless of skill level! Tournament settings are a great way to play against other players you normally wouldn’t match against, meet new people, play new charts, and just have an all-around good time. In addition to the tournament games, there will be several other arcade games to play. TVs will be on site for those that wish to bring consoles to play. The event is BYOB. Food is not provided but options are near the venue, and we are working on getting on site options.

On site registration is available, but please pre-register if possible. Cut off is 11:30.

Structure of the bracket.

The tournament will be in a round robin format with the top 8 players doing a double elimination bracket. This will give participants more rounds to play. The round robin portion of the event will be best of 3. The player with the best of 3 will be given 1 point. The top 8 players with the most points will move on to the finals bracket. Depending on attendance of the event, the round robin bracket may be limited to 2 songs per round with 1 point given per song. Final 4 is best of 5 songs.

For the round robin bracket, players will have their chance to choose their own song from the entire pack “lowers range”. Each lowers difficulty range can be found in the following game sections. Coin flip will be used for the 2 players in the round. Winner of the flip will decide either first song pick or pad side, while the other player will get their choice of the other. The losing player of the song gets the next song choice. Ex: P1 gets coin toss picks and wins 1st song. P2 then picks the next song. The purpose of this method is to encourage players to study charts before the event and gives both players the opportunity to play a chart that fits their strengths. The top 8 will follow card draw. Top seed in the bracket will get the first pick of either pad side or song veto/protect. Top 4 bracket has no veto/protect due to 5 song play with 5 card draw.

All songs must be played on M or X Mod. No Cmod. “Boys off” aka fault window disabled. Mines must stay on. Turn mods are allowed. Event scoring will use the Waterfall timing/score system. Player with the highest percentage score wins the song. In the event of a tie, a random song of the same difficulty will be selected and played to satisfy the tie. The round robin portion of the bracket will use song difficulties ranging from 8-10. The top 8 bracket will play chart difficulties 11-13.

The version of the game played will be DDR A20. (this is so we can stream the event) EX score will be used for deciding the winner of the song. Holds, jumps, freeze arrow must stay on. Turn mods and mirror are allowed. Lowers song selection will be 9-15. Finals will be based on 16 song difficulty. In the event of a tie, a random song of the same difficulty will be selected and played to satisfy the tie.

Version of the game played will be Pump It Up Prime 2. Money score will be the deciding factor for winner of the song. The lower song bracket will consist of song choice 10-16. Upper bracket will be 17-20. In the event of a tie, a song of the same difficulty will be selected to satisfy the tie.

Players are to be respectful to each other and the venue during the event. Event staff has the right to remove players at any time. If a player makes the decision to be disrespectful during the event, they will be removed from the bracket.

Pace of the event is very important. If a player is not playing in another tournament bracket or using the restroom when their turn is called, they are to start their round within 3 minutes. EX: if you are playing another arcade cab between rounds and your name is called, you are to stop what you are doing to play your tournament round. Failure to do this will forfeit your round to the opponent.

The 2nd GOLDEN LEAGUE A3 period begins on June 23, 2022 through July 20, 2022. Players ending the period with a gold rank will receive 「Teleportation / Tatsunoshin」 as the song reward and the ability to play the 10 Dan course. New songs will be added to the DDR A3 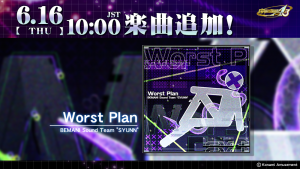